Office of the Registrar

Office of the Registrar

Our commencement ceremony celebrates the accomplishments of our students and honors them for completing their undergraduate and graduate degrees at Western.

Western is proud to offer a livestream of the 2022 commencement ceremony for the family members and friends of our Mountaineers who are unable to attend in-person. The stream will begin at 10 a.m. on Saturday, May 7, and users will be able to pause, rewind and fast forward the broadcast at any point during the stream.

Western Colorado University is pleased to announce Commencement will be held Saturday, May 7, 2022, at 10 a.m. in the Mountaineer Bowl followed by a reception for students, families, faculty and staff.

Since this event will be held outdoors, our graduating students and their family and friends will experience Western’s beautiful mountain setting. Still, spring in the Rockies is fraught with unpredictable conditions. As we like to say, our best back up plan is be prepared for anything.

Guests are being asked to bring plenty of warm clothes and blankets for the ceremony, which should last about two hours. Sunny skies are the norm throughout the year in Gunnison, so sunscreen and sunglasses should be a part of preparation for a glorious day.

We will continue to provide updated information on this webpage so please check back regularly.

We look forward to seeing you on Saturday, May 7!

Where do I get a cap and gown?
Do my guests need tickets to attend? Is there a limit to the number of guest I can bring?
Do I (the graduate) need to have a ticket?
One of my guests needs accessibility accommodations, how do I reserve them an appropriate space and where will they get to sit? Do the rest of my guests get to sit there as well?
What happens if the weather is bad?
Will the ceremony be livestreamed somewhere?
Will there be a rehearsal ceremony?

If you are a graduating student, click here to watch our virtual Commencement rehearsal video! 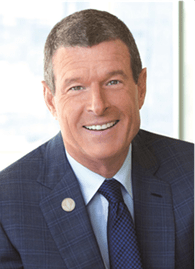 Johnson, a political science graduate from the class of 1977, is the retired chairman and Chief Executive Officer of Herbalife Nutrition, a premiere global nutrition company that serves customers in over 90 countries.

Johnson served as Herbalife Nutrition’s CEO from 2003 to 2017 and as chairman since 2007. Under his leadership, Herbalife Nutrition grew from net sales of $1.1 billion in 2003 to $5 billion at the end of his tenure, implemented industry-leading standards in consumer protection, and built a global brand through its sponsorship of more than 200 teams, athletes, and fitness events around the world. Johnson is a fitness enthusiast and has been participating in triathlons and cycling races for more than 30 years.

Prior to joining Herbalife Nutrition, Johnson spent 17 years with The Walt Disney Company where he served as president of Disney International, reorganized its foreign operations to improve efficiency and enhancing the Disney brand, leading to more than $1 billion in revenue.

Throughout his successful business career, Johnson has stayed engaged with his alma mater.  He was a strong supporter of the former ski program and a major donor to the Borick Business Building. Following the end of NCAA skiing at Western, Johnson conceived of the year-round Mountain Sports Program, which has become one of the athletic mainstays of Western, encompassing skiing, freeride, mountain biking, climbing and trail running. He has combined investment with vision in becoming the program’s first and strongest donor.

Recently, Johnson returned to campus to share his “Rules of the Road” in navigating business and life.  During his return to campus, he stopped by campus radio station, KWSB, to revisit his former days as disc jockey.

Spring Commencement 2022 caps off a year in which Western—its students, faculty and staff—have persevered through a global crisis, the COVID-19 pandemic.

Western has held in-person, hybrid, and online classes consistently throughout the year by making the health and safety of the campus community a priority,

Since Spring Commencement will be held outdoors, graduating students, family and friends will experience Western’s beautiful mountain setting. Still, spring in the Rockies is fraught with unpredictable conditions. The best back up plan is be prepared for anything.

A student and family reception will be held in the University Center Ballroom following the ceremony.