Administration has announced that spring classes will begin in a remote setting until Jan. 24, 2022. Learn More.
Home / Steven Cole Hughes 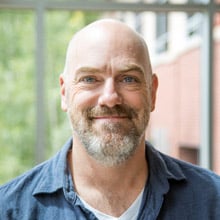 Steven Cole Hughes is an actor, director, playwright and theatre educator. He was a Visiting Professor of Theatre at Western Colorado University for the 2015-2016 academic year. He was the Playwriting Mentor at Regis University’s Mile High MFA, and also Adjunct Professor of Acting at the University of Denver. His plays have been produced at the Bloomington Playwrights Project, the Coterie Theatre, Creede Repertory Theatre, Curious Theatre Company and the Denver Center for the Performing Arts. He is the winner of the 2008 Denver Post Ovation Award for Best New Work for Billy Hell, and the 2011 Ovation Award for Special Achievement for The Billy Triology.

As an actor, he has appeared at theatres all over the country, on television’s “Law & Order,” and in the Denver Center for the Performing Art’s production of Macbeth. He has a B.A. in Theatre from Indiana University and an MFA from the National Theatre Conservatory.