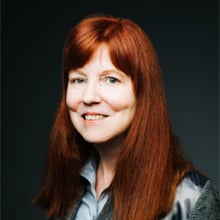 Julie Kane holds a B.A. from Cornell University, an M.A. from Boston University and a Ph.D. from Louisiana State University, where her dissertation on the villanelle won the Lewis P. Simpson Dissertation Award. Her poetry books include “Rhythm & Booze” (2003), a National Poetry Series winner; “Jazz Funeral” (2009), winner of the Donald Justice Poetry Prize; and “Paper Bullets” (2014), a collection of light verse. The Vietnam memoir that she co-authored with Kiem Do, “Counterpart” (1998), became a History Book Club Featured Alternate.

Kane’s poems and translations appear in over 50 anthologies, including “Penguin’s Poetry: A Pocket Anthology,” “Norton’s Seagull Reader” and “Best American Poetry 2016.” She has collaborated with composer Dale Trumbore on the one-act opera “Starship Paradise,” premiered by Center City Opera Theater of Philadelphia, and with composer Kenneth Olson on City of Lights for orchestra and soprano, premiered by the Natchitoches-Northwestern Symphony.

Composer Libby Larsen’s settings of Kane’s poems have been recorded on CDs by The American Boychoir and by mezzo-soprano Susanne Mentzer. Kane’s scholarly essays have been published in Twentieth Century Literature, Literature/Film Quarterly, Modern Language Quarterly, The Princeton Encyclopedia of Poetry and Poetics, and other journals and edited collections. The 2011-2013 Louisiana Poet Laureate, she is a Professor of English and recipient of the Excellence in Teaching Award at Northwestern State University of Louisiana.

I first learned of the low-residency MFA in Creative Writing program at Western, in which I now teach, at the West Chester Conference on Form and Narrative in Poetry.

Serving as Louisiana Poet Laureate from 2011-2013. Winning the National Poetry Series, judged by Maxine Kumin. Winning the Donald Justice Poetry Prize, judged by David Mason. Receiving a Fulbright Scholarship in Creative Writing/American Studies (Poetry) to lecture at Vilnius Pedagogical University in Lithuania in 2002. Reading my poem which won the 2008 Open Poetry International Sonnet Competition at the awards ceremony at Cambridge University in England. At the university from which I retired prior to joining the faculty of Western, receiving the Excellence in Teaching Award, the Mildred Hart Bailey Faculty Research Award and the Dr. Jean D’Amato-Thomas Lifetime Achievement Award, and having a Chair position named for me in my former department.

Poetry has sparked my interest since I was a small child, and I am fortunate to have a career that revolves around reading, teaching, writing and performing it.

Hiking in Crested Butte at the peak of wildflower season.