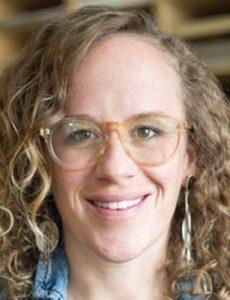 “I’ve always excelled in smaller environments, and Western fit that perfectly. The school attracts high quality professors because this community and the land around us is incredible."

When Mallory Logan arrived at Western as a freshman in 2004, she’d already moved at least eight times in her life. She remembers being excited to meet new people and spend time in the mountains. Little did she know she’d found the place that would become her permanent home.

“Gunnison was the first place I felt part of a community. Like I was a piece of a bigger puzzle,” Logan said.

That feeling was due in part to strong mentorship she received from professors and other university leaders. She credits her experience in Academic Leadership Program (ALPs) and guidance from Dean of Students Gary Pierson for helping her find her way early on.

She entered college hoping to find a way “to get paid to make art.” Initially she leaned into the art portion of her goal by declaring a major in Painting. During a semester studying in Hawaii, she came to the conclusion that life as a fine artist was too financially risky for her. She switched paths and declared a Graphic Design major—a decision that gave her room to create and make a living.

As she worked toward her degree, Logan took on an internship at Roshambo, a local graphic design firm. Eventually she worked her way up to a full-time position. Just six years after starting her internship, she bought the company. Today she runs her business, manages a small staff and gets paid to make art.

In 2016 Logan ran for and won a seat on the Gunnison City Council. Now two years into her experience on city council “it’s been a great deep dive into local politics.”

And also a bit humbling.

“I went in with preconceived notions about how the policy world works and quickly realized everyone wanted to work together because they loved this place so much,” Logan said.

“I’ve always excelled in smaller environments,” Logan said. “And Western fit that perfectly. The school attracts high quality professors because this community and the land around us is incredible. I wouldn’t live anywhere else.”