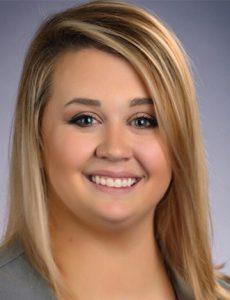 "A 2015 graduate, Lindsey Possehl double majored in Mathematics and Computer Science, which led to her current role as a data scientist for Ruffalo Noel Levitz."

For Lindsey Possehl, being a Mountaineer runs in the family.

With both her grandfather and father (and, later, her younger brother) as Western alumni, Lindsey always suspected she might also end up on Western’s campus.

“It’s kind of a family thing … we grew up coming to Gunnison, [I heard] stories about Gunnison and the University. We came to basketball camp here. [Attending Western] was always something that lived in the back of my head,” Lindsey said.

Although she had always considered coming to Western, Lindsey hadn’t planned on majoring in both Mathematics and Computer Science.

She started out as a geology major. When it came time to take math classes to fulfill the Biology program requirements, though, Lindsey realized that she really liked the mathematics courses—enough that she changed her major to mathematics.

Then, in between exploring new trails and experiencing the Gunnison valley’s culinary options, Lindsey took on a few Computer Science courses and found that she loved those classes, too.

“If I was in a class and we were focusing on software development, but I had an idea for a project, they would let me follow that—because they knew that was the career path I wanted to go down,” Lindsey said of her professors. “They kind of kept pushing, and I’m glad they did. Without that, I wouldn’t be where I am.”

Now, Lindsey works as a data scientist for Ruffalo Noel Levitz, a higher education consulting firm. In this role, Lindsey is able to flex both her computer science and mathematics muscles, creating predictive models and developing new products for various colleges and universities. She’s also the youngest sitting board member for the University of Iowa’s Tippie College of Business.

“Having math and computer science on any resume in today’s world is going to help you get into a good career … it’s going to give you good tools,” Lindsey said.