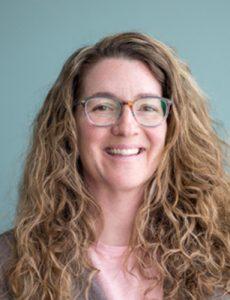 “A liberal arts degree is so valuable....but really the most important thing Western did for me was give me an environment where I was able to succeed.”

Kate Robinson graduated from Western in 2007 with a degree in Computer Science.

“I’m not sure why I decided Computer Science was a good idea. I didn’t even have a computer at the time,” Robinson said.

The decision paid off. Through her Computer Science classes and work-study job in IT Services, Robinson discovered a group of friends and started on the path toward her current career.

She went on to become a Senior Network Administrator at Western and taught a networking course through the Mathematics & Computer Science Department. The students are the same as they were ten years ago, according to Robinson.

“They’re all trying to figure out what they want to do,” Robinson said. “I love helping them.”

When the chair of the Math & Computer Science Department asked her to teach a networking course, Robinson felt it would be a good opportunity for the students. It would give them a chance to learn about networking from someone who was doing it professionally, and she knew she could show a different side of what was available in IT. Of course, it was a lot more difficult to create a course than she anticipated.

“There wasn’t a curriculum,” she said, “but it was good for me to go through what I do every day, so I could walk others through it in the classroom.”

She makes a point of sharing her path to her current position with her students. There is a wide variety of careers in IT and they change frequently, so Robinson emphasizes the value of doing just what she did—find a work-study opportunity, an internship or a summer job in a Computer Science field.

“Seeing the practical application of what you learn in the classroom really gives you a boost when you enter the work world,” she said.

She also manages a group of work-study students and enjoys guiding them through projects and helping them develop their professional skills.

Originally from Connecticut, Robinson was drawn to Western because of the small class sizes. She attributes much of her own success to the involvement of faculty members.

“I was coming back to school and starting a new major. Their involvement helped me stay focused,” she said. “There’s just more accountability in small classes. When you don’t show up it’s obvious.”

The combination of practical experience she gained from her work-study job plus her education at Western have helped her throughout her career.

“A liberal arts degree is so valuable. I write and do more public speaking in my job than I thought I would,” Robinson said. “But really the most important thing Western did for me was give me an environment where I was able to succeed.”