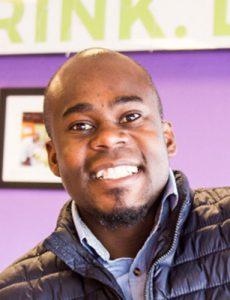 Originally from the Blue Mountains in Jamaica, Jermaine Rodney ‘14 made his way to the Gunnison area in 2009.

He returned to the area for three consecutive summers before making the full move in October 2011 and beginning classes at Western in 2012. In just two years, he completed two degrees, Computer Information Science and Business Management.

Since then, Rodney has been working full-time for Western’s Information Technology (IT) department and managing several independent business ventures, such as a Jamaican coffee distribution company and more recently, a local café bearing his name.

His café, Jermaine’s, is nestled in the Mountain Meadows Mall by City Market, where it offers 14 varieties of frozen yogurt and toppings, fresh baked bagels and pastries, Jamaican coffee drinks and so much more.

“I wanted to change the fact that kids felt that they didn’t have a healthy alternative to the bars, a positive outlet,” Rodney said.

He opened the friendly, brightly colored café in June 2017. The café’s long hours and couches scattered amongst tables encourage people to linger, to take as much time as they want in a space where they can feel comfortable and welcomed.

Jermaine’s is guided by the Jamaican lifestyle of irie, a feeling Rodney seeks to create for his customers.

“When you enter the space, I want you to leave the burdens of society and your life, the struggles that you’re going through. The atmosphere alone should put a smile on you and brighten your day,” Rodney said. “When you leave, you should leave with a different perspective and have a different attitude towards the rest of your day. We try to create those vibes.”

This atmosphere draws in many members of the Gunnison community, which voted Jermaine’s the Best Place for Ice Cream and Frozen Yogurt shortly after opening. The Gunnison Chamber of Commerce also recognized Jermaine’s as the Best New Business of the Year 2017 award.