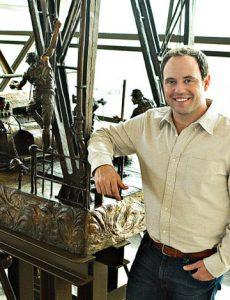 “Western’s Professional Land & Resource Management program was exactly what I needed, and I was thrilled to have found it."

Chance Chase didn’t end up in Gunnison the way most Mountaineers do.

It was 2008. Chance was living in Florida, wearing shorts and flip-flops. He’d just graduated from Rollins College in Winter Park with a degree in psychology.

“That is, of course, when the economy tanked,” Chase says. “I quickly realized that it would take me another eight years to make a living, the family business was calling, and I decided to get serious about my career and my future. I needed a business degree.”

Chase’s family business, where he is now a vice president after earning his degree in Business in 2010, is Mack Energy Corp., an oil and gas business based in Chase’s hometown of Artesia, N.M.

“Western’s new Professional Land & Resource Management program was exactly what I needed, and I was thrilled to have found it,” Chase says.

Within months of applying, Chase had moved from Florida to Gunnison and started his first of two years in the PLRM program.

“I wasn’t a traditional student at Western, but I quickly found that I fit in here better than I did in Florida. I developed amazing relationships with my professors, and I got along better with my fellow students,” he says.

“My professors were fantastic. We had guest speakers who helped us better understand the industry, and we were able to attend industry conferences that helped launched our professional lives. In my graduating PLRM class, every person who wanted a job had one, and the two who didn’t wanted to travel after they graduated.”

But it wasn’t just the PLRM classes that helped prepare Chase for his career.

“Having grown up around oil and gas, Western’s diverse student body provided my first real opportunity to more liberal thinking. I really enjoyed my environmental studies classes. I didn’t always agree with my professors or classmates, but they helped me see the world in a different way, and I really enjoyed the debates we had.”

It was that diversity of thought that helped Chase bring new ideas to Mack Energy when he graduated in 2010. Chase has risen to the rank of vice president and says he works to educate people about how Mack Energy is working to protect the environment and its employees. Chase is also on the board of the Chase Foundation, which has donated more than $9 million to the Artesia community, where Mack Energy is based.

Chase says Western is still an important part of his life. He’s played a role in the hiring of two other Western graduates at Mack Energy Corporation. Matt Buckles, a 2009 PLRM graduate, now works at Mack Energy, along with 2010 Business graduate Reid Edwards.

“I travel all over the place for work, and the oil and gas industry is full of Western grads,” Chase says.

Chase’s commitment to Western continues with his appointment to the Western Colorado University Foundation’s Board of Directors.

“I love being a part of the Foundation, because we get to give kids the opportunity to go to college,” Chase says. “And a lot of those students wouldn’t have been able to go without the help of the Foundation.