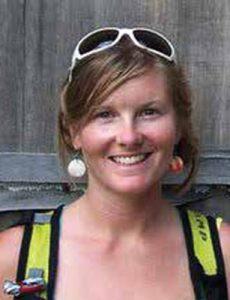 As a freshman, Amy Stevens (’05) arrived on campus not knowing how to ski, rock climb, mountain bike or kayak.

Now she works full-time with Irwin Guides while running her own business—yet still finds time to travel four months out of the year.

“I didn’t even look at any other schools. It was the only place I applied,” Stevens said. “My first year I did as much as I possibly could.”

She dove right in, dedicating nearly every weekend to a Wilderness Pursuits trip—and eventually began leading trips. Today, she spends her weekends doing pretty much the same thing.

“When I have days off, I just go on another adventure,” she said.

The Harlem, Michigan native grew up camping but wanted to learn more about the outdoors. She joined the Mountain Rescue Team, spending every year at Western with the organization. She also dabbled in other clubs, helped lead orientation and headed campus tours.

“I was a little bit more reserved before I came to Western,” Stevens said. “I think going to such a small school and being in this really healthy outdoor environment just encouraged me to do exactly what I wanted to do. I could get involved with so many different things and get involved with what I love.”

Her time with Wilderness Pursuits developed into her guiding career. After college she headed north to work for Alaska Mountain Guides, but ended up returning to Gunnison despite the stoke-worthy skiing.

“I really couldn’t wait to get back here. I thought I was leaving for good, but I missed it,” she said. “I’ve lived in places you can do all the same stuff, but I really just love the community here.”

It’s a community that has stayed with her through the transition to adulthood. Today she lives within blocks of friends she met at Western. She even married one.

“It’s really neat to see the same faces I’ve seen for 16 years and have the same friends,” she said. “We have this family here that we started in college as kids ourselves, and now everyone is starting to have their own kids.”

When Stevens came back to Gunnison, she bought a home and turned it into the Wanderlust Hostel.

“I had a six-bedroom house and felt like it was fun to share it. I love to wake up with a bunch of new people. It’s a really unique way to live” she said.

She only just moved out this fall.

The business represents her: funky, crazy and colorful. There’s even a costume closet.

“That’s a piece of college I can never get rid of,” Stevens said.

Making her home in the same town she went to school in is cool, Stevens said.

“I love seeing the young people starting off here,” she said.