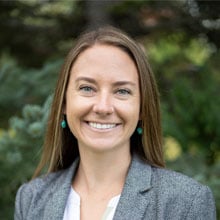 As an alumna, Laurel returned to Western in 2019 to help launch the Western-CU Boulder Partnership Program. Prior to returning to the Gunnison Valley, she worked as a Team Captain & Professional Academic Advisor at Fort Lewis College in Durango, Colorado and Recruiting Coordinator at Central Community College in Grand Island, Nebraska. She also spent two months in Costa Rica before settling back in Colorado. Six weeks of which were at Finca Bellavista, a treehouse community deep in the Costa Rican jungle. She loves to travel and recently spent time in India visiting her older brother who lives part-time in Mumbai. While at Western, she studied abroad in Buenos Aires, Argentina; was the President of the Women’s Club Soccer team; Vice President of Sigma Tau Delta (English Honors Society); and took first in the women’s category of the 2011 Campus Rail Jam. As the Assistant Director of the Western-CU Boulder Partnership Program she serves as the primary advising contact for first and second year students in the Computer Science and Mechanical Engineering programs. She provides logistical support to the program by collaborating on student success and strategic initiatives; managing course sequencing and scheduling; and creating standard operating procedures for student advising and transfer into CU Boulder.

I was first introduced to Western by my dad, who attended in the early ’70s. Every time we took a trip to the Western Slope growing up, he would drive the family around campus, show us every house he ever lived in as a student, and reminisced on the good ol’ days in Gunnison. I rolled my eyes from the back seat until I came for Preview Weekend in February 2008. It was a record winter and the sidewalks of Crested Butte were lined with six-foot-tall walls of snow. I had a fabulous tour of campus, met inspiring faculty members, and went to a freezing cold hockey game at the outdoor rink. I was hooked. That August, I packed up my things, moved into Moffat Hall, and began my journey as a Mountaineer.

In 2021, I was awarded the Colorado Department of Higher Education’s “Advisors LEAD Course” certificate of completion and co-presented “University Partnerships Across Rural & Urban Colorado” at the Rural College Access and Success Summit. In 2014, I was awarded the Innovation & Spirit Creativity Award at Central Community College for going above and beyond to support students and the college during a transitional period, which was an awesome recognition. In general, though, it’s always a highlight to see a student that I maybe started working with as a first-year student or sophomore, reach graduation and go on to pursue his/her/their dreams.

I’m really intrigued by the use of data and technology to make advising more efficient, effective and, ultimately, to promote student persistence, retention and success.

The community and location. I love to mountain bike, ski, snowboard, play soccer, do yoga and get outside as much as possible. This is such a special location in terms of its recreational opportunities. It’s also an amazing community that I believe really cares about one another and the place that we get to call home.