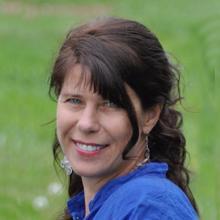 Laura Pritchett is the author of five novels. She began her writing journey with the short story collection Hell’s Bottom, Colorado, which won the PEN USA Award for Fiction and the Milkweed National Fiction Prize. This was followed by the novels Sky Bridge, Stars Go Blue, Red Lightning, and The Blue Hour, which garnered other awards. Stars Go Blue, her bestselling novel, has been optioned for film.

Her work has appeared in The New York Times, The Sun, Salon, High Country News, The Millions, Publisher’s Weekly, The Normal School and many others. Her first play, Dirt: A Terra Nova Expedition, was produced last year.

She grew up on a ranch in northern Colorado with eight siblings and hundreds of weird animals, including a pet racoon and blind pigeon. She still resides in Colorado, has two teenage kids in college, and spends free time walking and cloudgazing. You can find out more at her website.