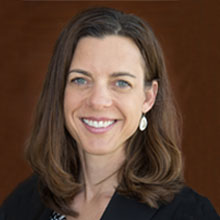 Julie Baca graduated from Western in 1994 with a degree in Political Science with a Law Emphasis before continuing her education at Southern Illinois University where she received a Master’s in Public Administration.

She provided community leadership in city management for over 13 years before returning to Gunnison, where she joined Western’s team in 2010. In her role as Vice President of Finance and Administration she serves as Western’s Chief Financial Officer and Chief Facilities Director. She has overseen over $150M in construction at Western and procured millions of state and grant dollars to support Western’s mission. She serves as a Mountaineer Mentor and the staff liaison to the Women at Western Club. She serves on various non-profit boards and was elected to represent Gunnison County on the Club 20 Western Slope lobbying association for over four terms.

She loves Western and living in the Gunnison Valley with her husband and four children.