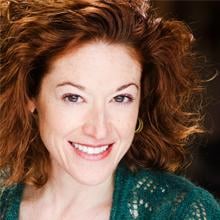 I grew up in Santa Ana, in Orange County, CA., graduated from Orange High School in 1993, then did a semester at Rancho Santiago Community College in Santa Ana before transferring to Western State College of Colorado in the Winter of 1994. I graduated in 1997 and moved to Denver where I began auditioning constantly, and working at the box office of The Denver Center for the Performing Arts. My job in the box office took many twists and turns and I ended up working on and off as the Assistant to The President and in the Broadway PR/Marketing Division, all while continuing to audition. I was cast in a tour for the DCPA which ended the other jobs there, and went on to work as an actor multiple times at the DCPA (and other theatres), and work as a year-round Teaching Artist in the Education Department. I moved to New York City in 2007 where I stayed for nearly 7 years and wracked up a million stories and experiences before my homesickness for Colorado was something I could no longer ignore. In 2013 I moved back to Denver and began working full time at The DCPA in the Education Department as well as continuing to act and direct, got married in 2014 and had our daughter in 2015. We settled in Gunnison for good when my husband Steve got the Director of Theatre position at Western in 2018. FULL CIRCLE, to say the least.

I am a 1997 alumni of Western, back when it was Western State College of Colorado! I followed my high school boyfriend here from Southern California in 1994. We broke up 72 hours after I arrived. Best mistake I’ve ever made.

I’ve had some incredible opportunities working in a multitude of jobs related to my field; I played Lizzie Borden in an off-off-Broadway play, performed at The Duke Theatre on Broadway in a workshop production of a new play, was Ron Howard’s personal assistant in his editing office during the post-production phase of a really terrible (his words!) film called “The Dilemma”, worked at as a Teaching Artist at Broadway’s New Victory Theatre, which was one of the most creative and wonderful jobs of my entire life!

I love that there are so many applicable jobs within my field. For a long time I thought it had to be acting to be deemed “successful”, but I was very wrong. I love acting, I think it’ll always be my great love, but I’m also incredibly happy when I work with teachers on integrating arts into their classrooms, or coaching a nervous corporate CEO on their upcoming presentation. There are a million ways to be creative-I love finding and diving into all of them.

Oh, so many things, but I think the biggest one is the people. How close my relationships are, how much we look out for one another, how we have each other backs. I’ve lived in a lot of really wonderful and supportive places but nothing beats how I feel when I’m in Gunnison.