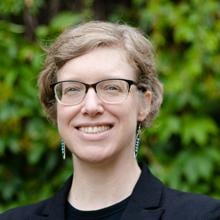 I am an art and architectural historian whose research focuses on gender and monastic life in the European Middle Ages. I am particularly interested in the ways that gender is reflected in the design of architectural spaces and ritual performance. I received my M.A. in Museum Studies from the University College London’s Institute of Archaeology, where I studied the English country house as heritage destinations in post-World War II Britain. I have worked on archaeological excavations in France and have done academic research in Spain, France, England, Germany, and Switzerland. I have previously taught art and architectural history at Brown University and the Rhode Island School of Design.

I am also a passionate museum professional, having worked as curator at Chiddingstone Castle in England, grants and programs manager at Arizona Humanities (an affiliate of the National Endowment of the Humanities), and executive director of the Telluride Historical Museum, Colorado. As an advocate for museums and historic preservation, I have presented at local and national conferences, including the American Library Association (ALA), Museum Association of America (AAM), the Society of Architectural Historians (SAH), and have served on the boards of the Central Arizona Museum Association and the San Miguel County Historical Commission.