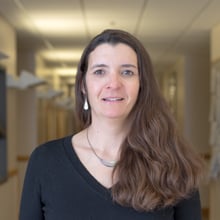 What is your favorite thing about teaching in the Gunnison Valley?

The Gunnison Valley is a great place to learn and teach geology. From campus we can access the three main rock types in less than five miles and can explore both ancient and modern processes that shape our world, including Precambrian igneous and metamorphic rocks exposed at Hartman Rocks, volcaniclastics of the West Elk Mountains, the fossil-rich Morrison formation, and examples of modern landslide deposits that challenge today’s infrastructure.

I study structural geology, and specifically how rocks deform and how this deformation influences the movement of subsurface fluids. This topic is applicable to earthquake processes, distribution of energy and mineral resources, and subsurface storage of carbon dioxide or other waste materials. As technological advancements push to expand what is possible in the energy business, a thorough understanding of geologic processes and resource distribution makes for both a rewarding field of study and career.

I am excited to prepare students via a mix of coursework, fieldwork and independent research to meet the challenges associated with providing accessible and sustainable energy.

Structural geology, fracture analysis, rock mechanics and fracture development. Specifically, I study fracture development and propagation, and the history of fluid flow through permeable, subsurface fractures in and across various sedimentary rock types. My research combines quantitative observations from outcrop, laboratory experiments, and subsurface data sets to understand the formation and distribution of subsurface fractures and fault zones. I focus on the role variations in rock mechanical properties have on failure across many scales of observation.