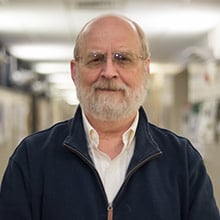 My research interest is in using game programming to interest all levels of students in computer science and using it to teach camps and low level classes.

For the last few years I’ve been directing students in the development of a Python game programming library, based on Pygame but much easier to use. It’s been used successfully in high schools, and in Western classes and summer camps, and it’s about ready for general public release.

There’s simply no end to the innovation. As a teacher, that always gives me something new and challenging to learn and then to teach. That’s a wonderful experience.

Two things—the environment and the people.

The environment is simply unparalleled for the things I like to do. I’m a motorcyclist and there are literally thousands of miles of trails and jeep roads in the county that I’ve been able to explore on my dirt bikes. Some of the best curvy paved roads in the country are here and I get to ride them on my BMW.

The people of Gunnison are like so many others in the American West—live and let live. That very much matches my own philosophy. Gunnison is a place where people want to live. That’s a great thing.