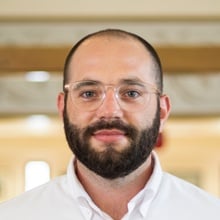 As a performer Brett Keating has appeared as a featured soloist with orchestra, brass bands, and wind bands in the U.S and Europe, including Switzerland, Italy, Germany, and the UK. His playing has been recognized at national and international competitions including: The Fischoff International & Plowman Chamber Music Competitions, Swiss National and North American Brass Band Championships. Brett performs in the award-winning Fountain City Brass Band and has recorded with the Gramercy Brass Orchestra. nominal duo, an experimental project with tubist Tom Curry, merges brass performance with electro-acoustic practices through their original compositions, improvisations, adaptations, thievery, and loads of wires. nominal has performed throughout the U.S. and in Canada and was recently featured in the 2021 Virtual Tuba Euphonium Conference. Their debut EP, s.i.p_1 was released in 2020. Nominalduo.wordpress.com

Brett Keating serves as Director of Bands and Brass at Western Colorado University. In this role he directs the Symphonic Band, Brass Ensemble, and Varsity Band. He teaches applied brass lessons and music education courses in conducting and brass methods. Additionally, Brett is the director of the Colorado Brass Band.

Prior to his appointment at WCU, Brett was Director of Athletic Bands at Carroll University. Additionally, he served as Interim Instructor of euphonium and tuba and on the Athletic Band Staff at the University of Kansas. Brett held simultaneous Graduate Teaching Assistantships with the wind conducting and the tuba/euphonium studios while earning his DMA in tuba/euphonium performance, an MM in wind band conducting, and a cognate in electro-acoustic composition at KU. Brett also holds an MM in performance and interpretation of classical & contemporary music from the Hochschule Luzern-Musik, where he lived in beautiful Lucerne, Switzerland for three years. He earned an Artist’s Certificate in low brass performance, as well as a BA in performance from the University of Wisconsin.