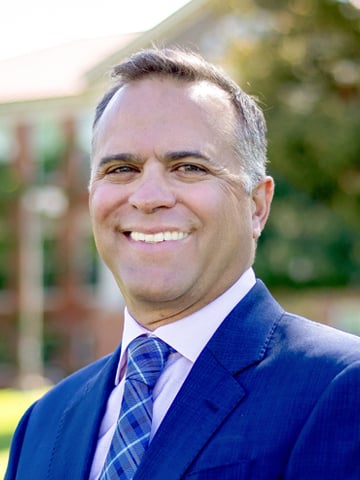 Brad Baca is the 15th President of Western Colorado University. He joined Western in 2002 as Vice President for Finance and Administration. In 2013-14 he served as interim President.

During his time at Western, Mr. Baca has developed a reputation as creative and trustworthy, someone who can convene stakeholders, facilitate problem solving, and accomplish complex goals. Whether it is leading campus-wide strategic initiatives, serving on a statewide task force, or representing Western at the State Capitol, Mr. Baca has always demonstrated passionate stewardship of Western’s mission and values and a strong dedication to student success.

Prior to joining Western, Mr. Baca served for over three years as Director of Budgets for the Colorado Community College System. He also served as a budget and policy analyst on the staff of former Colorado Governor Roy Romer.

As a rural Colorado native and a first generation Hispanic student, Baca earned a B.A. degree in Government from Dartmouth College in Hanover, New Hampshire. He also earned an M.A. in Public Policy from the University of Colorado-Boulder, focusing on education policy.

Baca lives in Almont with his wife Julie, a Western alumna, and their four children. He is an avid outdoorsman and enjoys spending time with his family mountain biking, skiing, camping, fishing and bow hunting.