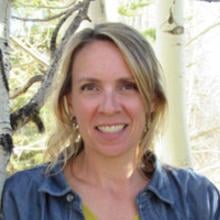 As Academic Advisor for first and second year students in the Western-CU Boulder Partnership Program, Anne employs a student-first, whole-person approach to academic advising. Anne has a background in the oil & gas and gold mining industries, including working in the Land and Production departments at Prairie Petroleum/Zavanna (Denver), and Blackwood & Nichols/Devon Energy (Durango), and in the Geophysics and Mining Engineering departments at Newmont Mining (Denver). She was the owner and director of Timberline, a rigorous academic school program serving a large diversity of families in the Denver area, for nine years. In this role she was heavily involved in hiring and directing teaching staff, setting academic development plans, curricula selection, education consulting, and academic record keeping. Anne has a degree in Psychology from Fort Lewis College, Durango, and studied clinical mental health counseling at the graduate level. She is also trained in neurofeedback therapy and listening therapy. Having lived in the mountains southwest of Boulder for many years, Anne and her family moved to Gunnison in 2017 to take it down a notch with small town living and take it up a notch with even closer accessibility to the great outdoors.