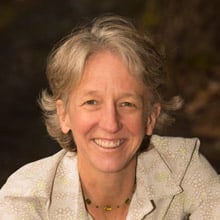 Ana Maria Spagna is the author of Uplake: Restless Essays of Coming and Going (University of Washington Press, 2018) and several previous nonfiction books on nature, work, civil, indigenous, and LGBTQ rights, including Reclaimers, stories of elder women reclaiming sacred land and water, a finalist for the 2016 Rachel Carson Book Award from the Society of Environmental Journalists, the memoir/history Test Ride on the Sunnyland Bus: A Daughter’s Civil Rights Journey , winner of the 2010 River Teeth literary nonfiction prize, 100 Skills You’ll Need for the End of the World (as We Know It) a humor-infused exploration of how to live more lightly on the planet, and two previous essay collections, Potluck and Now Go Home. Her first novel for young people, The Luckiest Scar on Earth, about a 14 year-old snowboarder and her activist father, appeared in 2017. Ana Maria’s work has been recognized by the Nautilus Book Awards, the Pacific Northwest Booksellers Awards, and as a four-time finalist for the Washington State Book Award. Her essays have recently appeared in Orion, Ecotone, Fourth Genre, Creative Nonfiction, Brevity, Sierra, High Country News. and elsewhere. Her current work-in-progress about Chinese miners along the Columbia River in the late 1800s has received support from Washington Trust Grants for Artists Program. After working fifteen years on backcountry trail crews, she turned to writing and teaching full-time. She lives in a remote community in the North Cascades accessible only by foot or boat.

The Luckiest Scar on Earth. Torrey House Press. 2017
External Professional Affiliations
Association of Writers and Writing Programs
Association for the Study of Literature and the Environment
Editorial Board – Wandering Aengus Press