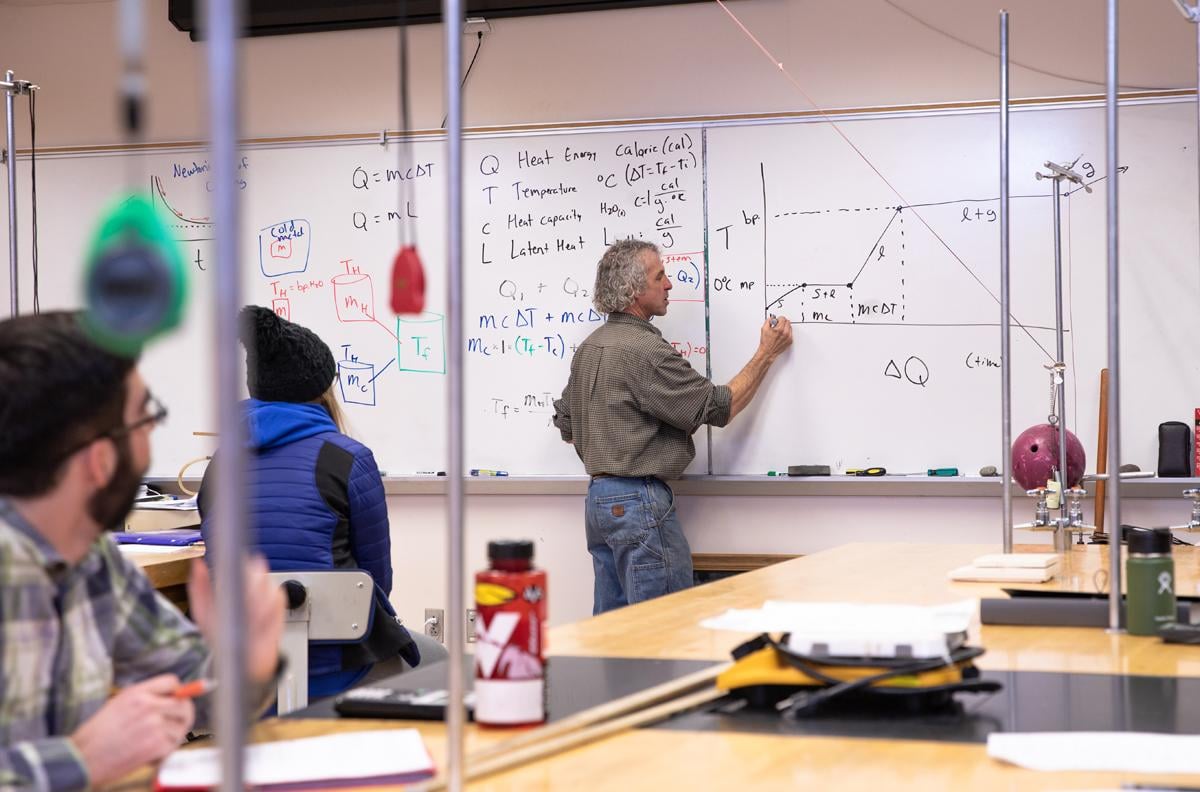 Office of the Provost

Office of the Provost

On the basis of our belief that the basic aim of Western Colorado University is to provide the best possible education for its students, and that the faculty should accept the responsibility for using its talents in order to more fully realize that aim, and that educational policy should always be derived from the broadest possible base in relevant opinions; and in order to promote ever-improving communication among all segments of the university community; and in order to contribute to the continued improvement of higher education—in Colorado in general and at Western Colorado University in particular—WE, THE FACULTY OF WESTERN COLORADO UNIVERSITY, hereby establish our Constitution.

The purpose of the Faculty Senate shall be to officially represent the faculty in all matters of interest and concern to the teaching faculty. These interests and concerns shall include but not be limited to reviewing and making recommendations to the President of the University on current and proposed changes in academic, administrative, fiscal and personnel policies as they affect the faculty and the academic mission of the University.

The faculty shall consist of individuals who hold current tenured, probationary or temporary contracts to teach for Western Colorado University. Department Chairs and the line-professional staff of the library shall also be classified as faculty. Individuals appointed for teaching or instruction related responsibilities on a per credit, per term basis are excluded.

Members of the faculty shall be entitled to:

1) notice of all Senate and faculty meetings and subsequent reports of all actions of the Senate and the faculty
2) participation in such meetings
3) vote for and serve as Senators and committee members
4) full participation in faculty review of Senate actions.

Meetings of the faculty may be called by:

1) the President of the University or his/her designated representative
2) the Chair of the Senate
3) a majority of the Senators
4) a petition from one-tenth of the faculty presented to the Clerk of the Senate.

1.1) Departmental faculty. Each department from the campus (the faculty responsible for delivering the education program shall constitute one department; the professional staff of the library shall constitute one department) shall be eligible to elect one Senator for each 12 faculty members holding an academic-year appointment in that department. The number of Senators from each department shall be the number of faculty in the department as shown in the staffing pattern of the Spring Term divided by 12, with all fractions being rounded to the next higher whole number. Senate rules shall determine which academic program areas form departments (amended Oct. 6, 1998).

1.2) Senators at-large. Two at-large Senators shall be elected by the faculty.

1.3) Ex-officio Senator. The Vice President for Academic Affairs shall be a non-voting ex-officio member of the Senate (amended April 30,1993).

2.1) Term of office: Each Senator shall be elected to serve a two-year term. The term of office shall begin with the last regularly scheduled meeting in the spring.

2.2) Vacancy provision: In the event that the term of any elected Senator is ended before its normal expiration date, the department of instruction shall elect another member of its faculty, who shall serve only until the normal end of the term of the Senator whose departure required the replacement.

2.3) Recall: An elected Senator may be recalled by a two-thirds vote of the Senator`s department. In the event of a recall, the department chairperson for the department shall notify the Chair of the Senate of the recall, who shall cause the roster to be amended accordingly.

3.3) Election procedures: The election of Senators shall be conducted by departments no later than eight weeks prior to the end of Spring Term, based on the staffing pattern for that term. A department may designate another faculty member as proxy for a Senator during his/her session off. The elections shall be by ballot and the results of these elections shall be reported to the Chair of the Senate. Each department shall develop its own procedures consistent with this provision. These procedures shall be written and available to the members of the department and shall be forwarded to the Clerk of the Senate. Election of at-large Senators will normally be conducted by secret ballot by the Election and Rules Committee during a two week period following election of Senators from each department by secret ballot. It shall be a goal for elections to elect approximately one-half of the total number of Senators each year. (Amended April 30,1993)
[Interpretation: 1) This applies only to department Senators. 2) It does not apply to at-large Senators. 3) It does not cover officers of the Senate. 4) Members of Senate standing committees may be selected to serve during the session their representative is off in the same manner.]

Section 4: Officers of the Senate

4.1) Election of officers: The elections of officers shall occur at the last regularly scheduled meeting of the Senate during the Spring Term. Those eligible to vote shall include those senators whose term of office commences with this meeting under the provisions of Section

2.1., together with those Senators who have been previously elected and whose terms have not expired. The elected officers shall include a Chair, a Vice-Chair and a Clerk. These officers shall be elected for a one-year term.

4.2) Eligibility: The Chair of the faculty senate must be a tenured member of the faculty. Any Senator shall be eligible to hold any other office (amended Nov. 21, 2005).

4.4) Vacancy: In the event the Chair shall vacate the office, the Vice-Chair shall become Chair and all other vacancies shall be filled by election from the Senate.

A) Duties and Responsibilities: It shall be the duty of the Chair to preside at all meetings and to carry out the policies and procedures of the Senate as defined in the Constitution and Bylaws. Further, the Chair is empowered to represent the Senate and thus the faculty by attending and participating in meetings of administrative councils and committees and all other such bodies whose duties, responsibilities and/or statutory authority may give rise to issues of concern to the faculty. The Chairman of the Senate may call and preside over general faculty meetings. The Chair or his/her designee shall be considered as the faculty’s advisor to the President and in the spirit of shared governance should participate as an ex-officio member of all task forces or groups created by the President to serve in an advisory capacity.

B) Compensation: The Chair shall receive as compensation for his/her duties either, one-quarter (1/4) release time from the institutional duties regularly assigned to a member of the faculty or shall receive a stipend in the sum of $5,000 per academic year. The stipend shall be increased annually at the rate of 3.2 percent per annum with the base year established as the 1993-94 academic year. It shall be the responsibility of the Chair to notify the University President of his/her selection prior to the beginning of the University fiscal year following the date of the Chair’s election (superseded by college salary plan May 2, 1994).

4.6) Senate Vice-Chair: It shall be the duty of the Vice-Chair to assume all duties of the office as defined in the Constitution and Bylaws and to assume the duties of the Chair in the absence of the Chair. The Vice-Chair shall also keep a roster of the members of the Senate, members of the Committees of the Senate, a complete current faculty membership list prepared by the office of the Vice President for Academic Affairs of all departments.

4.7) Senate Clerk: All resolutions and proceedings of the meetings of the Senate shall be recorded by the Clerk or a designated recorder. The Clerk shall also prepare all required notices and documents, including action agendas and reports of final Senate and faculty actions and shall supervise the recording of Senate and faculty meetings in a form convenient for reference.

Section 5: Powers of the Senate

5.1) Shared Governance: The right of the Faculty to become involved in all matters of educational concern and to participate in institutional governance is herewith expressly recognized as the source of faculty authority and responsibility. The exercise of such right and power shall always be in the best interests of the institution, the students and the faculty, but shall not operate to preclude or otherwise inhibit the President from the lawful pursuit and efficient exercise of the administrative charge delegated by trustees.

5.2) Senate Action: Faculty power shall normally be exercised through its representative delegate assembly, the Senate. Any action taken by the Senate shall carry full force and effect, subject to the review powers of the Faculty, as provided in Bylaws, and of the President, when such action is not inconsistent with the laws of the United States and the State of Colorado or with the policies of the Trustees.

5.3) Official Position: Actions taken by the Senate, subject to review by the Faculty as provided in Bylaws, shall be regarded as the official position of the Faculty of Western Colorado University and shall constitute its recommendations and advice on institutional and other matters of educational significance, to be represented as such in all appropriate quarters.

Section 6: Procedures of the Senate

6.1) Referendum: Any act of the Senate shall be referred to the faculty for final determination upon a majority vote of the Senate or upon presentation of a petition signed by 10 percent of the faculty.

6.2) Initiative: The Chair shall include on the next agenda of the Senate any new business matter when such is requested in writing by five or more members of the faculty.

Section 7: Committees of the Senate

7.1) Formation: The Standing Committees shall be specified in the Bylaws. The Senate shall also have the power to form ad hoc committees.

7.2) Powers and Duties: The Senate may assign powers and duties to these committees.

7.3) Senate Rules of Operation: The Senate shall have the power to adopt its own rules of operation to carry out these assigned responsibilities.

In meetings of the Senate, all questions of interpretation of the Constitution and Bylaws shall be referred immediately to the Rules Committee, which shall convene, consider the matter and issue a ruling before the matter be put to a vote. All questions of parliamentary procedure not specifically mentioned by the Constitution or Bylaws shall be decided according to the newly revised Robert’s Rules of Order.

Ratification of constitutional amendments will require an affirmative vote by secret ballot of a simple majority of the faculty casting ballots. Constitutional amendments ratified take effect immediately, subject to acceptance by the President and the Board of Trustees; except that bylaws ratified by the Faculty but not by the President may be submitted to the Trustees for their consideration should the Faculty or Senate request.