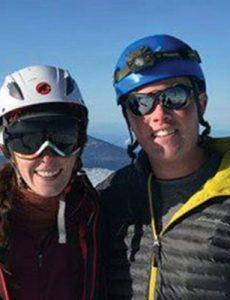 "Using resources from Western's Mountain Rescue team and Wilderness Pursuits, Smith and Snellstrom embarked on a quest to climb the highest peaks in the lower 48 states."

In August 2018, Ali Smith ’16 and Aric Snellstrom ’16 finished climbing every point over 14,000 feet in the contiguous United States.

Smith, from Houston, and Snellstrom, from Colorado Springs, met in Moffat Hall early their freshman year. One Saturday night that fall, the duo spontaneously drove to climb Uncompahgre. It didn’t take long for this summited peak to turn into another, and another…

After they’d checked off 25 fourteeners, Smith joked that they could finish the rest in Colorado.

Snellstrom remembers it differently: “Ali told me and everyone that she was going to climb all the fourteeners in Colorado. I told her that was a ridiculous idea.”

“Our goal was to never get in over our heads,” Smith said. “As we faced mountains like Capitol Peak, the Maroon Bells and the Palisades Traverse in California, we began consulting our friends from the Western Mountain Rescue Team and Wilderness Pursuits more often, particularly with rope work.”

When it came to exceptionally dangerous climbs like Thunderbolt Peak and Mount Rainier, the importance of their polar-opposite personalities began to show.

“I’m really reclusive and scared to do a lot of stuff,” Snellstrom said. “Ali is the exact opposite. She would come up with all of these crazy adventures and I would fine-tune everything.”

From wide-eyed freshmen to record-setters, Smith and Snellstrom are an embodiment of what it means to be a Mountaineer.