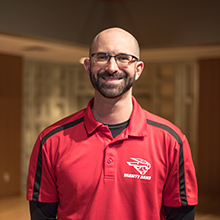 Steven Siegel is Assistant Professor of Music at Western Colorado University where he teaches applied brass lessons, directs the Symphonic Band, Varsity Band, and Brass Quintet, and teaches music education courses including brass methods, instrumental methods, intro to music education, and conducting. In addition, Dr. Siegel is the director of Colorado Brass Band which was founded in 1975 by John Kincaid.

Prior to his appointment at Western, he served as Instructor of Trumpet at Centre College in Danville, Ky., and Interim Instructor of Trumpet at Campbellsville University in Campbellsvilly, Ky. During this time, he also served as a trumpet teaching assistant at the University of Kentucky, where he completed a DMA in performance in May 2017 as a student of Jason Dovel.

Dr. Siegel enjoys a busy performing schedule in both classical and commercial settings. He has performed in a variety of ensembles including the award-winning Lexington Brass Band, DiMartino/Osland Jazz Orchestra, Bluegrass Area Jazz Ambassadors, Amarillo Symphony Orchestra, Lexington Chamber Orchestra, and numerous community and collegiate ensembles. As a soloist, Dr. Siegel has performed with numerous ensembles including the Lexington Brass Band, Colorado Brass Band, and Lake City Stinger Band. In February 2018, he was a featured soloist at the CMEA Conference with the Western Colorado University Jazz Band. As an active member of the International Trumpet Guild (ITG), he was selected to perform at both the 2019 and 2017 ITG Conference New Works Recitals, giving the premieres of three new works, Poem at Cantwell Cliffs for trumpet and piano by Nicole Piunno, Ascent for two piccolo trumpets by Jason Dovel, and A Stroll Through Kalavryta​ for trumpet and piano by Jason Dovel. He currently serves as a Recordings Reviewer for the quarterly ITG Journal.

Prior to teaching at the university level, Dr. Siegel was a high school band director for three years in Henry County, Va. During this time, he taught marching band, jazz band, concert band, music theory, and percussion ensemble. Under his direction, his concert and marching ensembles won first prize awards at numerous competitions.