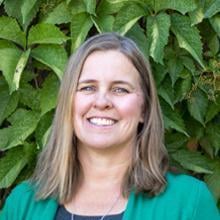 Sherri Anderson taught in high school for fourteen years. She was the English Language Learners teacher and sophomore English teacher at Gunnison High School, where she was also the head coach of the high school Speech and Debate team. During her tenure at GHS, she started the GHS chapter of LULAC, developed the international travel program, and was the author and recipient of numerous grants.  A coach of Premier Distinction, she led the Speech and Debate team to numerous state titles, as well as achieved charter member status (2019), the highest level of distinction from the National Speech and Debate Association. In 2014, she was named GHS teacher of the Year, as well as receiving an IREX fellowship from the United State Department of State. She received her Bachelor’s in Marketing and Business Administration from Western Michigan University (1997), a Bachelor’s of English and Secondary Education from Western Colorado University (2003), and her Master’s in Culturally and Linguistically Diverse Education from Adams State (2013). She presented her master’s thesis at the Annual Meeting for Anthropological Studies (2013) and was awarded the Alumni Award for Excellence from Western Colorado University. Her current interests include reducing barriers for new teachers looking to enter the workforce and advocating for a more diverse teacher workforce.