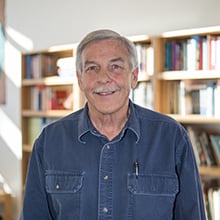 Dr. Mark Todd, founder of Western’s MFA in Creative Writing, has been a Professor of English at Western since 1988. He currently serves as Director of the Undergraduate Creative Writing Program and as Contributing Editor for Western Press Books, which oversees the Graduate Program in Creative Writing’s Certificate in Publishing.

Todd has 25 years of professional journalism experience, having published hundreds of news stories, features, columns and editorials in local through international markets. He also served as editor and publisher of both a newspaper and a regional magazine and, at one point, digested online news for the Lycos daily news service.

In addition, Todd directs Western’s summer creative writing conference, Writing the Rockies. Todd has performed his poetry and given fiction readings across the country and in Europe. His books include two collections of poetry, “Wire Song” (Conundrum, 2001) and “Tamped, But Loose Enough to Breathe” (Ghost Road, 2008). He is author of the science fiction novel “Strange Attractors” (Write in the Thick, 2012) and co-author with wife Kym O’Connell-Todd of the paranormal comedy/fantasy trilogy “The Silverville Saga: The Silverville Swindle” (Ghost Road, 2006), which was reissued as “Little Greed Men” (Raspberry Creek, 2011), “All Plucked Up” (Raspberry Creek, 2012), and “The Magicke Outhouse” (Raspberry Creek, 2013). All were nominated for Colorado Book Awards and “Little Greed Men” was also nominated for the Colorado Blue Spruce Award.

Currently, he and Kym are at work on a creative nonfiction book about hauntings in frontier mining towns of the Rocky Mountains.

I was the recipient of the 2017 Karen Chamberlain Lifetime Achievement Award for Colorado Poetry, and I have appeared on both Colorado Public Radio and the Travel Channel representing my work.

The ability to think boldly and both challenge and surprise myself through spoken and written words. Even more, I love kindling excitement in other people—friends, audiences, students—about the incredible potential of verbal expression to transform our own and others’ lives.

Both the place and the people.