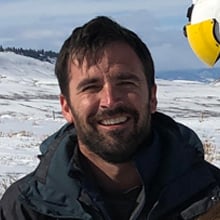 Kevin Blecha started in the research field at Kansas State University working on the small mammal, passerine and plant communities of a tall-grass prairie ecosystem. He then transitioned to studying population size and behavior of white-tailed deer, with a stint on measuring the distribution of river otters across a large region. After that, Kevin completed his M.S. graduate work at Colorado State University focusing on puma predation behavior and the landscape selection risk-reward tradeoffs imposed by the wildland-urban interface of the Rocky Mountain Front Range. His current position as an agency (Colorado Parks and Wildlife) terrestrial biologist based here in the Gunnison Basin, he is tasked to monitor various ungulate and large carnivore populations, recommend harvest quotas, and perform other wildlife management and conservation related tasks. He also conduct studies on the movement and distribution of ungulates. His current ecological interests are to improve the understanding of animal behavioral trade-offs and how it translates to the spatial distribution and population dynamics observed on the landscape. Taking this information and successfully applying it to wildlife conservation and management problems is the ultimate reward. His field work involves using telemetry and other observational data to estimate population size/distribution and quantify survival rates/cause-of-death; information that can be used in both agency’s population monitoring programs and applied research. He commonly employs integrated population models, survival analysis, resource selection models, movement modeling techniques, species distribution models, agent-based modeling simulations, or various generalized statistical modeling approaches to generate inferences.

Specifically, Kevin has two major research projects that he is currently working on, each if which have several off-shoots: