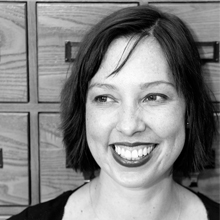 Kat Howard is a writer of fantasy, science fiction and horror who lives and writes in New Hampshire.

Her novella, The End of the Sentence, co-written with Maria Dahvana Headley, was one of NPR’s best books of 2014, and her debut novel, Roses and Rot, was a finalist for the Locus Award for Best First Novel. An Unkindness of Magicians was named a best book of 2017 by NPR, and won a 2018 Alex Award. Her recent short fiction collection, A Cathedral of Myth and Bone collects work that has been nominated for the World Fantasy Award, performed as part of Selected Shorts, and anthologized in year’s best and best of volumes, as well as new pieces original to the collection. She’s currently the writer for The Books of Magic, part of DC Comics’ Sandman Universe. Her next novel, A Sleight of Shadows, is the sequel to An Unkindness of Magicians, and will be out in 2020. In the past, she’s been a competitive fencer and a college professor.