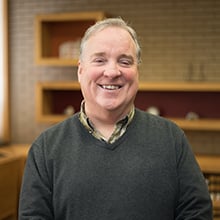 After earning my graduate degree and teaching as a lecturer at Wake Forest University for two years, I applied for a tenure track position in film here at Western. I was hired, moved here in 2007, and have enjoyed loving and teaching here ever since.

I earned an Emmy nomination for my film “Engineering Is Everywhere” while working as a PBS producer/director in Eureka, Calif., in 2000. I earned a highly competitive and coveted CINE Golden Eagle Award for my graduate thesis film “Jackson Sandwich” in 2006. I earned an International Film Berlin Award for my film “Across the Fence” in 2014.

Storytelling and being able to create media for social change is my driving force. I am proud to have taken on autism awareness, sexual assault, sustainability in ranching, hazing and archeological paradigm shifts in my creative (filmmaking) work in recent years.

The pristine natural beauty of our landscape here is a treasure along with the quiet rural setting and friendly atmosphere.