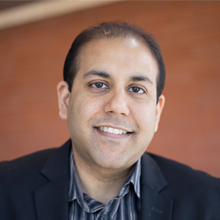 J S Mayank is the Director of Western’s Screenwriting concentration. He is a British-Indian filmmaker, represented by UTA. He has several TV projects and features in development at the moment.

His first sci-fi feature script, Slate, earned him a spot on the 2009 BLOODLIST (the Horror/Sci-Fi/Thriller Blacklist). He was invited by Robert De Niro’s Tribeca Film Festival to the prestigious 2010 Tribeca All Access Program for his feature script Marathon. For his directorial debut, Mayank was granted an opportunity by the band Radiohead to create a concept music video for their song Weird Fishes/Arpeggi. He worked alongside visual artist extraordinaire John Langdon (Angels & Demons) to design special ambigrams for the video.

Most recently, Mayank’s script for EMIT won a Grand Prize at the Table Read My Screenplay contest, beating out over 1,200 other scripts, and winning him a trip to Sundance (2012), where a table-read of it was performed. Since then, he’s directed Emit starring Jack Coleman (Heroes, The Office, Scandal), and the short has played at over 30 festivals all over the world.

Through another Western faculty member, Jack Lucido, who told me about the new MFA program he was leading the screenwriting track of with Mark Todd. I was very interested in the low residency component, and then fell in love with the program and the school.

I love teaching screenwriting, which is an ever-evolving field with a ton of changes almost every day—with the industry warping from the old Hollywood studio model, to the new streaming world.

I love the Western campus!