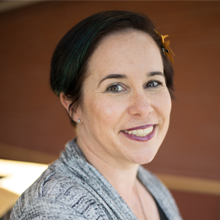 Fran Wilde’s novels and short stories have been finalists for four Nebula Awards, a World Fantasy Award, and two Hugo Awards, and include her Nebula- and Compton-Crook-winning debut novel Updraft, its sequels Cloudbound, and Horizon, her 2019 debut Middle Grade novel Riverland, and the Nebula-, Hugo-, and Locus-nominated novelette The Jewel and Her Lapidary. Her short stories appear in Asimov’s, Tor.com, Beneath Ceaseless Skies, Shimmer, Nature, and the 2017 Year’s Best Dark Fantasy and Horror. She writes for publications including The Washington Post, Tor.com, Clarkesworld, iO9.com, and GeekMom.com.

I first came through Gunnison in the late twentieth century, on a road trip. A millennium later, I was asked to be a featured genre speaker at Western and learned more about the MFA program from my predecessor, Russell Davis.

In 2015, I won a Nebula Award for my debut novel, Updraft. My novels and short fiction have been finalists for three more Nebula Awards, two Hugo Awards, a World Fantasy Award, and two Locus Awards, and longlisted for a British Fantasy Award. I’ve published more than 40 short stories, numerous nonfiction articles in The Washington Post, and five novels.

I love the mountains, and any place with a functioning observatory is utterly wonderful. I’m looking forward to getting to know the Valley better.