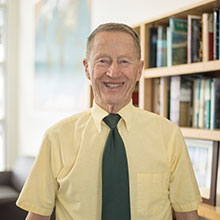 By accident, heard about it from a fellow graduate student at Oklahoma State who was offered a job but did not take it because Western would not also offer his wife a job on the staff.

The constant learning about how history seems to come near repeating itself and how much one can learn from the past. I am always infatuated with two quotes. 1) Immanuel Kant: “There are truths of the heart that are greater than the truths of the mind.” 2) Issac Newton: “I see myself as a little boy walking along a beach now and then picking up a pretty stone while the vast ocean of unexplored knowledge lies in front of me.”

The mountains, the elevation, the clear blue skies, the great history of the past, and living in one of the great outdoor areas in the world, complete with great skiing, mountain biking, hiking, climbing, hunting and fishing.