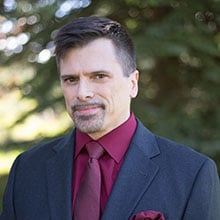 Dr. Anthony Miccoli is an internationally recognized expert in the field of Posthuman Studies, focusing specifically on the cultural and philosophical roles of technology in our daily lives. Exploring the points of interface between the human and the technological, Dr. Miccoli’s research views the technological as an epistemological—and ultimately ontological—expression of humanity. Being-in-the-world depends upon a self-image reflected by, and through, our technological constructions. Humans are, and have always been, through technology. His philosophical specialization is the philosophy of technology and posthumanism, covering epistemology, ontology, and metaphysics; especially in relation to existentialism and cultural studies.

Dr. Miccoli’s first book, Posthuman Suffering and the Technological Embrace is the culmination of nearly a decade of research that began in the field of literary theory and eventually led him to the then-evolving field of the philosophy of technology. In it, Dr. Miccoli contends that Posthumanism portrays technology as an “other” to be embraced, and consequently has lost sight of the basic realities of the human/technological boundary. Technology becomes a superior model of information processing to which humans aspire. We do not embrace technology to expand and augment our selves, we embrace technology so that it may embrace us. The posthuman view reconceptualizes the human being to be made more compatible with computerized systems or possible artificial intelligences.

Dr. Miccoli’s most recent work, “Posthuman Topologies: Thinking Through the Hoard,” appears in Design, Mediation, and the Posthuman, part of Lexington Books’ Postphenomenology and the Philosophy of Technology series. “Posthuman Topologies” continues Dr. Miccoli’s work, maintaining that the process of cognition is contingent upon the physical topologies a consciousness occupies. Each human being literally thinks through the particular material environments he or she inhabits at any given time. Thus, every object around us becomes an aspect of mindedness.

The implications of Dr. Miccoli’s research are vast, and helps us understand the unique ways in which humans, animals, and machines perceive the world, allowing us to re-cast the process of consciousness in a way that allows for a more holistic approach to environmentalism and technological development. Such work will also help us to better position ourselves as developments in nanotechnology, artificial intelligence, robotics, and prosthetics further destabilize an already tentative representation of self-other dichotomies. Dr. Miccoli integrates many of these concepts into his courses at Western, and covers a plethora of posthumanist ideas in his sections of Introduction to Philosophy, Reality and Representation, and Philosophy of Science. Aspects of distributed cognition are also covered in his section of Logic and Epistemology. Dr. Miccoli also teaches Women & Gender in Philosophy, Philosophy of Religion, Eastern Philosophy, as well as other special topics courses.

“In this rigorous and sophisticated analysis, Anthony Miccoli explores the relationship between humanity and technology, providing an informed history of posthuman studies and charting new territory….Miccoli has written a book worthy of close attention and capable of leading posthuman studies down new pathways.” — The Journal of the Fantastic in the Arts

“Still, no matter one’s theoretical commitments, background training, or current intellectual tutelage, Miccoli has written a frustrating and, at times, frightening, but ultimately outstanding book bolstered by rigor and riddled with hidden in- plain-sight understandings of the human/technology embrace.” — The Information Society: An International Journal

“Posthuman Suffering and the Technological Embrace is a much-needed study … Miccoli’s deployment of Scarry’s framework within the posthumanist discourse as well as his critical reading of Hayles’s work definitely deserve attention.” — Extrapolation